Scroll to Top
Go to DASHBOARD > Appearance > Menus to set up the menu.
Categorized as
3136
Tagged as
ADHDChildren With ADHDMedication
Related 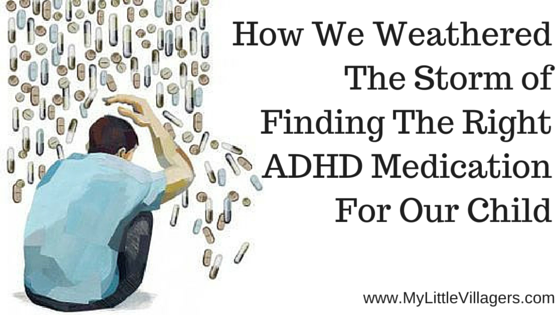 Disclaimer: This article was not written to convince parents of children with ADHD to put them on medication. Some children are able to manage their ADHD without medication and I think that is fantastic. However, everyone is different and ADHD affects people differently. My husband and I decided to use medication for our daughter and I am simply sharing my family’s experience with finding the right medication for her.

There are lots of different ADHD medications available nowadays and there’s never a correct answer when people ask which is the best one. Some people use a Vyvanse coupon to get affordable ADHD medication, others like using Zenzedi, a few find Azstarys the most effective — it all depends on the person taking them and how it makes them feel. For example, when my husband with ADHD was a child, he was put on Ritalin to help him focus better in school. Although it did help with his schoolwork, he remembers hating the way it made him feel. He said it almost felt like he was having an out of body experience when the medication would take effect. According to my husband, whenever his parents would bring up a concern about his poor performance in school, his doctor would simply increase the dosage. This left my poor husband feeling and looking like a zombie in the classroom. Once my husband reached high school, he decided enough was enough. He absolutely hated the way his medication made him feel, because he simply wasn’t himself when he was on it, so he decided to stop taking his medication altogether.

When my husband and I found out that our (then) five year old daughter had ADHD, we were scared to use medication for her (especially my husband), because of the bad experience he had with it as a child. We started our daughter out with behavioral therapy sessions twice a month and we worked closely with her kindergarten teacher and principal to get her the classroom accommodations she needed. Although her behavioral therapist and the school staff were absolutely wonderful, it was clear to everyone that it simply wasn’t enough for our daughter. She was still struggling at school and was falling behind, especially in reading. She needed even more help with managing her ADHD.

After doing hours of late night research and having a lot of emotional discussions, my husband and I decided to try the medication route for our daughter. This was a huge deal for my husband, because he was able to get through high school and college without any medication and he did just fine, but he realized that ADHD affects people differently. Not taking medication may have worked fine for him, but it may not work for his baby girl. That’s the thing about ADHD. We all know it is hereditary, but that doesn’t mean it will be managed the same way for all family members.

We met with a child psychiatrist and she suggested we try Ritalin, so we did. It seemed to help her focus better at school and while doing her homework, but to our surprise, it also made her very sensitive and have sudden mood swings. The littlest thing would set her off and she would go to her Calm Down Space to cry at least five times a day. Since this was the first medication we tried for her, we just accepted the side effects and appreciated the fact that she wasn’t struggling in school anymore. That was the whole purpose of putting her on medication after all. Unfortunately, after about two months, the medication stopped helping her focus like it used to. Her doctor said that it happens sometimes and then prescribed Metadate. After we brought the medication home and did more research on it though, all of the side effects scared us, so we decided not to use it. Her doctor explained to us that Metadate and Ritalin have the same side effects, because they are both methylphenidate-based, but at that point, I was just so frustrated, overwhelmed, and aggravated by the situation.

That is when her doctor prescribed Concerta. I had heard a lot of success stories about children using it from the ADHD groups I belong to on Facebook, so I was feeling very hopeful about it. Perhaps Concerta would be “The One.” It wasn’t. Concerta turned my precious little girl into a zombie. Yes, it prevented her from wiggling around in her seat and talking a million miles a minute, but when I looked at her sitting in the pew at church one Sunday completely zoning out, I thought to myself, “That is not my little girl.” Not only did my daughter’s bubbly and silly personality disappear, Concerta replaced it with anger and moodiness. She would snap at us and have full blown meltdowns. What used to work to calm her down didn’t have the same effect anymore. It was complete chaos. I was even afraid to take her out shopping with me, because I never knew what would set her off. It was like walking on eggshells around her. When she would have a massive meltdown, there was nothing I could say or do to help her either. All I could do was hold her in my arms until she finally calmed down on her own. While looking down and seeing her puffy red eyes, feeling her heart beating fast, and listening to her out of control breathing, I lost it. What the hell am I doing to my child? She is experiencing all of this because of me. I am the one who gave her this medicine. I am the one who is causing her this pain. The guilt a parent of a child with ADHD can feel is overwhelming and heartbreaking. I told her doctor she needed to be taken off of Concerta immediately.

That is when the doctor decided to try a completely different stimulant: Vyvanse. I informed my daughter’s teacher that she was trying a new medication and the doctor said to give it a week or two to fully work. After the first week, my daughter’s teacher told me that she noticed she was unable to focus at school and has been very interruptive. Another week went by and she said that there was no improvement. Well, crap. We are back to square one. I felt so guilty for having my daughter struggle at school for two weeks with Vyvanse. I honestly felt like she was being treated like a human guinea pig and I was the mad scientist. I felt like I was failing her as her mother and I was at a loss for what to do next.

I told her doctor what her teacher said about her poor performance at school and I was expecting her to suggest another medication. Instead, she said to try increasing her dosage from 10mg to 20mg. Red flag! Red flag! This is exactly what happened to my husband when he was younger and what he was afraid of happening all over again with our daughter. This is the reason why he was against medicating her in the first place. As politely as I could, I explained to the doctor our concerns, but she insisted that we should at least give it a try before trying a new medication, especially since my daughter wasn’t experiencing any of the moodiness and anger the way she did with Concerta. The doctor was right in that aspect. While on 10mg of Vyvanse, she wasn’t able to focus, but at least her true personality didn’t vanish. Although we were a bit skeptical, I talked it over with my husband and we decided to increase the dosage by 10mg per the doctor’s suggestion.

I am happy to report that the doctor was right. 20mg of Vyvanse is “The One” for my daughter. She is able to focus much better in school and while doing her homework. I’ve also witnessed her hyper focus on other tasks, like sitting down at a desk and writing and decorating four Mother’s Day cards all on her own. She isn’t overly sensitive, moody, and angry. Best part of all, Vyvanse doesn’t take away her bubbly and silly personality that we all love and adore so much.

Finding the right medication and dosage was a long and emotional rollercoaster for both, my daughter and myself. I absolutely hated having my daughter experience all of the negative side effects of the medications and her having to struggle in school during the trial periods. It crushed me. It made me feel like a horrible mother and I questioned my decision to medicate her altogether. Looking back now, I am still not happy about what I put her through to find the right medication. I still feel incredibly guilty about it. What I am though is appreciative. What I feel is so complex, it is difficult for even myself to understand. I appreciate the fact that despite my frustration and aggravation, the doctor never gave up. She kept trying. And so did I. So did my daughter. I also appreciate the fact that my daughter forgave me for what she went through. She is only six years old, but she is mature enough to understand that she had to go through a storm to get a rainbow. She is now thriving at school, making wonderful new friendships, and best part of all, showing the world her magnificent true colors.