Scroll to Top
Go to DASHBOARD > Appearance > Menus to set up the menu.
Categorized as
9705
Related 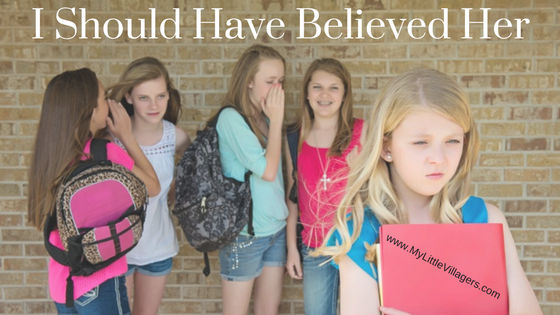 My daughter with ADHD has a tendency to overdramatize things that happen to her. If she stubs her toe, then that day becomes “the worst day in the world!” If she gets one spelling word incorrect on her test, she says, “I’m the dumbest kid in the world.” I love my second grader to pieces, but to say that she is a Drama Queen is an understatement. I don’t know if it is an ADHD thing, a girl thing, an Italian thing, or maybe all of the above, but this is how she’s been for as long as I can remember.

When my daughter would come home from school, telling me that she had a bad day because “all of the girls are mean,” I had a hard time believing her. How could it be that all of the girls in her class were mean to her? I told her to stop exaggerating. I told her that she must have misunderstood what the girls were saying or doing, because again, how could all of the girls be acting this way toward her? Also, my daughter isn’t the best at reading social cues, which is very common for children with ADHD. She is also very sensitive. Sometimes, if another child so much as looks at her a funny way, that could set my daughter off into a crying spell.

The past several months, my daughter and another girl in her class have become very close and are now best friends, which has been an enormous blessing for our entire family. Instead of crying in the morning about not wanting to go to school, she now happily puts her school uniform on, because she can’t wait to see her best friend. They even got each other sets of best friend necklaces and bracelets that they wear. I love my daughter with all  of my heart, but I admit she is a bit “different” when compared to the other girls in her grade. She is immature, very hyper, and can’t stop moving around. She is impulsive, impatient, and can even be rude sometimes, although that is not her intention at all. (These are all things that we are working on, by the way.) Fortunately, her best friend loves her positive traits so much, that she is willing to forgive her for her negative traits and even work with her on them. (Only a parent of an ADHDer knows what a tremendous blessing a friend like this is.)

At recess, my daughter only plays with her best friend, because she is her only friend. It wasn’t until recently that I found out the heartbreaking reason why. While talking to her best friend’s mom, I found out that there were several “mean girls” that formed a group way back in Kindergarten. Little by little over the past two years, they have been “recruiting” other girls to join their clique. When my daughter and her best friend would play with some of the nicer girls, the “mean girls” would call the nice girls over to their group and tell them not to play with my daughter and her best friend. Can you believe this shit? These are seven year olds purposely excluding other girls? (I don’t know about you, but this clique crap didn’t start for me until I was in middle school.) Sadly, it gets worse. One day, one of the girls from that clique that was also friends with my daughter’s best friend gave her an ultimatum; She told her that she could either join her clique to be in the “Fabulous Group” or stay friends with just my daughter and be in the “Weirdo Group.” I want you to think about this for a moment. A seven year old girl is given the choice to join the “cool group,” which consists of all of the girls in her grade verses being friends with only one little girl with ADHD, who is “different” than a typical little girl and can be difficult to be friends with at times. Think back to when you were in second grade. What would you have done, really? Well, I am happy to report that she chose my daughter. This little girl has so much strength, courage, love, and honor in her heart, probably more than some adults I know. As you can imagine, I absolutely adore her.

When my daughter came to me before and told me that all of the girls at her school were mean to her and wouldn’t let her play with them, I didn’t believe her and I feel like absolute shit because of it now. She did the right thing by coming to me and all I did was dismiss what she said, because I thought she was just blowing things out of proportion like she always does. When I heard what was really going on at school, that my daughter is purposely being excluded and isolated, and that she is being labeled as a “werido,” my heart completely sank. I felt like the worst parent alive. I went to church today and I asked God for forgiveness. I asked Him to give me the same strength, courage, love, and honor that my daughter’s best friend has in order to fix what I should have fixed when my daughter first came to me. I also had a long talk with my daughter and asked her for forgiveness too, which she gave me immediately.

My Mamma Bear claws are out and in full force now. I have contacted the principal of the school and I will be visiting the schoolyard at lunch tomorrow to see for myself what is happening. I plan on having a parent-teacher conference soon as well. If these “mean girls” are still bullying after the principal and teacher get involved, I am not afraid to contact each and every one of their parents until this stops for good! Please follow My Little Villagers on Facebook for updates on this story.

If you have experienced bullying at school with your child, please share your experience and advice in the comments.