Scroll to Top
Go to DASHBOARD > Appearance > Menus to set up the menu.
Categorized as
1667
Related 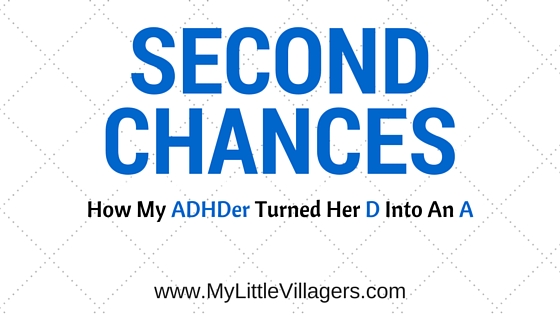 “Giuliana is bringing home her math test today. My TA gave it to her one-on-one and she said Giuliana had a really hard time focusing. She said she usually knows the concepts, but she got 6/9. She also had a hard time concentrating when we worked in our workbook.”

Until now, my child has received A’s and sometimes B’s on her tests. When she has a test coming up, I sit with her and help her study over and over and over. Studying for a test on a boring subject can feel like torture for both of us, so I let her move around, jump around, and fidget with things. To strangers, my child looks as if she is not paying attention, but she is. She learns better when she’s moving and although it appears like she isn’t listening, she is. She doesn’t learn in a conventional way, because she doesn’t have a convention brain, but I assure you she’s retaining everything and her test scores prove it.

For the first time yesterday, she got a D on her math test. When she came home from school, I looked over her test. The math problems she got incorrect were math problems I have practiced with her at home and she has done on her homework numerous times. I had her do similar math problems on the spot and sure enough, she got every one correct. I asked her what was going on at school today and that her teacher told me she was having a hard time focusing. She said that the work was boring and that she was daydreaming about having a playdate with her best friend. I told her that I understood how hard it is for her to focus on something that is boring, but tests are very important, because that’s her time to shine and show her teacher how smart she is.

Now comes the part where I know some parents may not agree with me. I emailed my child’s teacher and explained how I gave her similar math problems to solve and that she understood the concepts and solved the problems correctly. I told her teacher that she was just having an off day and I asked her if it was possible for her to retake the test to improve her grade. My child wasn’t too thrilled about having to take the same boring math test again, but I explained to her that getting good grades has always been important to me and I want to instill the same values in my children. (I also bribed her with new Shopkins if she took the test again and promised me she’d try her best. Come on, guys! She’s six years old… and Shopkins always works for her.)

So the next day, my child retook the test (Different questions, same concepts) and got 100% on it. I was so proud of her and I was proud of myself as well for standing up for my child and allowing her to get the actual grade she deserved. But then I had a horrible thought… Am I going to have to do this every time my child gets distracted at school and doesn’t perform well on a test? When and how many times am I supposed to intervene? When am I supposed to just let it go? As a parent, it is so hard to see our children fail when we know they are capable of so much more. By intervening like I did though, is my child not learning anything? Will she think Mommy will always take care of it? Will she think there will always be second chances at school and in life?

I realize she’s only in the first grade and she definitely wasn’t going to decide all on her own to ask her teacher if she could retake the test. I am really hoping that she did learn from this though and will learn to advocate for herself as she gets older. I know not every teacher is going to give my child a second chance, but I really hope they do. Just like her classmates, my child is learning the same subject material, but my child is also learning how to control her brain that probably has at least five different thoughts at any given moment. I don’t have ADHD myself, so I can only imagine how exhausting that must be for her. Some kids with ADHD (like my daughter) are using every ounce of energy to simply focus on one task. They are doing the homework, studying, and taking the same tests as their classmates. These ADHDers really are trying their best and their effort needs to be recognized.

Some days will be off days for our ADHDers and it’s not their fault, their teacher’s fault, or our fault. It’s really nobody’s fault. Their brains are just wired differently than most people’s and this can sometimes affect their performance at school. I hope and pray educators will realize this and give these children a break and another chance to show the world what they’re really capable of.