Scroll to Top
Go to DASHBOARD > Appearance > Menus to set up the menu.
Categorized as
12184
Tagged as
ADHDBloody NosesNosebleeds
Related 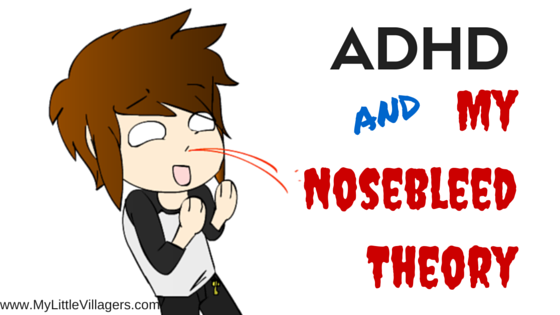 Let me start out by saying that I am not a doctor, nor have I conducted any large studies on this subject. I am merely a mother making an observation and looking for an answer. My daughter and husband both have ADHD. They also both have frequent nosebleeds. And no, it is not a side effect of medication, allergies, or picking their nose. (Yuck!) Within 30 minutes after asking other parents on my Facebook group if their ADHDers have frequent nosebleeds too, 7 out of 10 said they did. That’s 70%! (Yes, I realize that only 10 people were in this “study,” but I just can’t brush it off as a coincidence.) Somehow, ADHD and frequent nosebleeds (aka Epistaxis) are related to each other.

Most people know that people’s brains with ADHD work differently, because they have low levels of dopamine, which is a neurotransmitter. After doing some research, I learned some interesting findings about the brain of an ADHDer. MRI studies show that children with ADHD have a smaller brain size by 5% than other children without ADHD. (Just FYI, people. Size doesn’t matter! A smaller brain doesn’t mean you are less intelligent. In fact, many people with ADHD actually have higher than average IQs.) I also learned that the pre-frontal cortex, striatum, basal ganglia, and cerebellum in children’s brains (especially with severe ADHD) were smaller as well. These areas are responsible for impulse control, inhibition, motor activity, and concentration.

So how is the brain and nose connected? Well, for one, there is the unique relationship between the nasal cavity and the cranial cavity tissues. Many medications are administered through the nose, such as sedatives, anti-seizure drugs, and opiates. The reason for this is because medications delivered via the nose-brain pathway leads to nearly immediate delivery of medications to the cerebral spinal fluid. Once the medicine makes contact with the olfactory mucosa in the upper nasal cavity, which is below the cribriform plate of the skull, the medicine’s molecules are then rapidly transported directly into the brain. In the past twenty years, a good number of encouraging outcomes have been reported in nasal medication treatment of diseases of the brain or central nervous system.

The nose and the brain are also connected when detecting and processing smells. Please excuse me as I go all science crazy on you now. Olfactory receptors on our olfactory epithelium bind odor molecules together when a smell enters our nose. Once an odor molecule binds on a receptor, it created an electric signal that travels from our sensory neurons to the olfactory bulb. The olfactory bulb sits at the base of the forebrain and it is what relays the signal to other brain areas (the piriform cortex and the thalamus) for additional processing. The thalamus is responsible for sending smell information to the hippocampus and amygdala, which are areas in the brain responsible for learning and memory. The amygdala is a part of the body’s limbic system, which is a “problem area” for people with ADHD. The amygdala is responsible for vital aspects of decision-making.

Where does the blood even come from when you’re having a nosebleed? Well, it can either come from a blood vessel located in the front of the nasal septum or from further back in the nasal cavity. Again, I am not a doctor and this is just my hypothesis, but I think that the nosebleeds ADHDer get come from the second. The cribriform plate is what separates the nasal cavity from the cranial cavity and as mentioned earlier, it sits on top of the upper nasal cavity. Also, as mentioned earlier, the overall brain size in ADHDers is smaller than most people’s and MRI studies have shown that specific areas in the brain of ADHDers are smaller as well. Perhaps the structural differences in the brain somehow puts pressure on the upper nasal cavity and this is what causes frequent bloody noses.

Well, those are my findings and my speculations, people. So how exactly is ADHD and Epistaxis connected? Honestly, I still don’t know, but I think I’m definitely onto something here. There is a connection between the two and I wish I had an answer for you. I really do. But I’m not a doctor and I think there needs to be much, much more research and studies done in order to form a well educated answer. Until then, I’ll just keep speculating.