Scroll to Top
Go to DASHBOARD > Appearance > Menus to set up the menu.
Categorized as
2192
Related 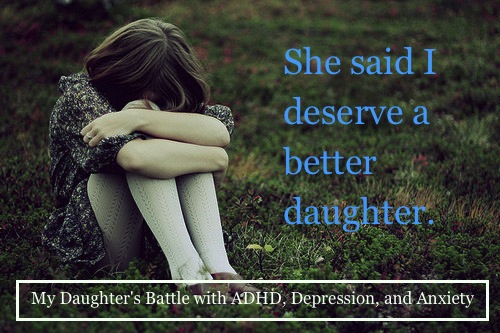 This is a tough subject for me to write about, because like any parent, I love my child with every ounce of my heart. All I want is for my daughter to always be happy. I want her to be able to easily make friends. I want her to thrive at school and be on the Honor Roll just like me… but the truth of the matter is she probably never will.

Giuliana is six years old and has been diagnosed with ADHD. She is also exhibiting symptoms of depression and anxiety, which are common for children with ADHD. The ADHD is very challenging. There is no doubt about it, but I am learning how to handle it. I can also handle her anxiety pretty well, but what I am having the most difficult time handling is her depression. I am pretty much a happy person. I love to laugh and I love to make people laugh. I am also a very positive person. (If you have seen Inside Out, I am Joy and Giuliana is Sadness.) Giuliana is such a beautiful little girl. She has gorgeous blue eyes, naturally curly brown hair, and a great smile, but according to her, she is ugly. She is also extremely creative, intelligent, funny, and compassionate, but you will never hear her use those words to describe herself. Instead, she constantly bashes herself and puts herself down. “Nobody likes me,” “I’m stupid,” and “I can’t do anything right” are what she says about herself, almost on a daily basis.

What really broke my heart was when Giuliana broke down in tears and told her psychologist, “I wish I was someone else. My mom deserves a better daughter. I wish I was never born.” She wishes she was never born? Can you imagine your child wishing they weren’t alive? Can you imagine having to hear your child say those words, with tears rolling down her face? She is only six years old. This was by far, my hardest moment of parenthood. I have never heard her say anything like that before and the only reason I was able to hear her say that was because she is too young to have private sessions with her doctor. I don’t know if she would have ever told me herself and although it hurt like hell to hear those words, I am glad I did, because it opened my eyes to what it really is like to be my daughter.

I push her. I push her way too hard. I don’t mean physically of course, but emotionally, which hurts even more. When she writes a letter backwards on her homework, I get frustrated with her for making a careless mistake. I make her erase it and do it over again. “Come on, Giuliana! Pay attention!” When she is taking too long to do a simple math problem, I get frustrated with her. “You know how to do this! Why is it taking you so long, Giuliana?!?” When she can’t just sit still in her chair at a restaurant for five minutes, I get frustrated. “People are looking at you! What is wrong with you?!?”

There is nothing “wrong” with her. She has ADHD. ADHD is not “wrong.” It is a medical condition she was born with. God made her that way and God doesn’t make mistakes, so no, there is nothing wrong with her. However, there is something wrong with the way I was handling Giuliana’s ADHD. When I would get frustrated and angry with her, I would lash out at her. I hate myself for the hurtful things I said to her. Instead of helping put out her own fire of frustration, I was fueling it and as a result, causing an explosion of depression in her. Her words in the doctor’s office made me realize that and since then, the Lord knows I have been trying my best to be Giuliana’s fire extinguisher. I admit, dealing with Giuliana’s ADHD feels almost like a full-time job and there are times when I do still feel like screaming (or pulling my hair out), but that’s when I take a deep breath and do my best to help her. I need to be her Joy, her teacher, her cheerleader. I need to be the one to fill her bucket of self-esteem up so high, it overflows, and I am proud to say that I am now doing just that. I always will be.

God does not make mistakes.